William Edward Burghardt Du Bois stands at the summit of African and African American history and culture. He was born in Massachusetts in 1868, the year the Fourteenth Amendment to the U.S. Constitution

was ratified conferring citizenship on the African Americans. He died in Ghana on the eve of the March on Washington for Jobs and Freedom in 1963, when the Rev. Dr. Martin Luther King, Jr., shared his dream for social justice at the height of the modern civil rights movement. 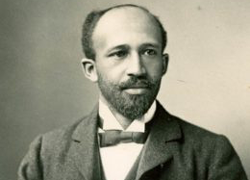 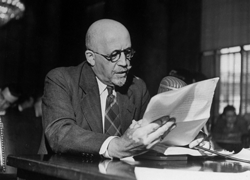 A searing critic of racial oppression, a political activist and institution builder, an author and editor, a historian, philosopher, pioneering sociologist, teacher, and fervent Pan-Africanist, Du Bois early on articulated a vision for free and independent African nations.


In May of 1961 Kwame Nkrumah, then President of Ghana, whom Du Bois had met and known since 1945, invited Du Bois to move to Ghana to undertake direction of the preparation of an ‘Encyclopedia Africana’, an interdisciplinary global publication to document the experience and historical contributions of African peoples in the world. From late 1961 to 1963 Du Bois lived a full life in Accra, the Ghanaian capital, working on the Encyclopedia. He died on August 27, 1963 the day before his American compatriots assembled for the March on Washington for Jobs and Freedom. He was interred in a state funeral outside Christiansborg Castle in Osu, formerly a holding pen for the slave cargoes bound for the Americas.


In 1984, Du Bois’s remains were removed from the Christiansborg Castle in Osu to its present site at No. 22, 1st Circular Road, near the American Embassy in Accra. The following year, the W. E. B. Du Bois Memorial Centre for Pan African Culture was opened, with Du Bois’s library, a museum, and the mausoleum where he and his late wife, Shirley Graham Du Bois, are buried.